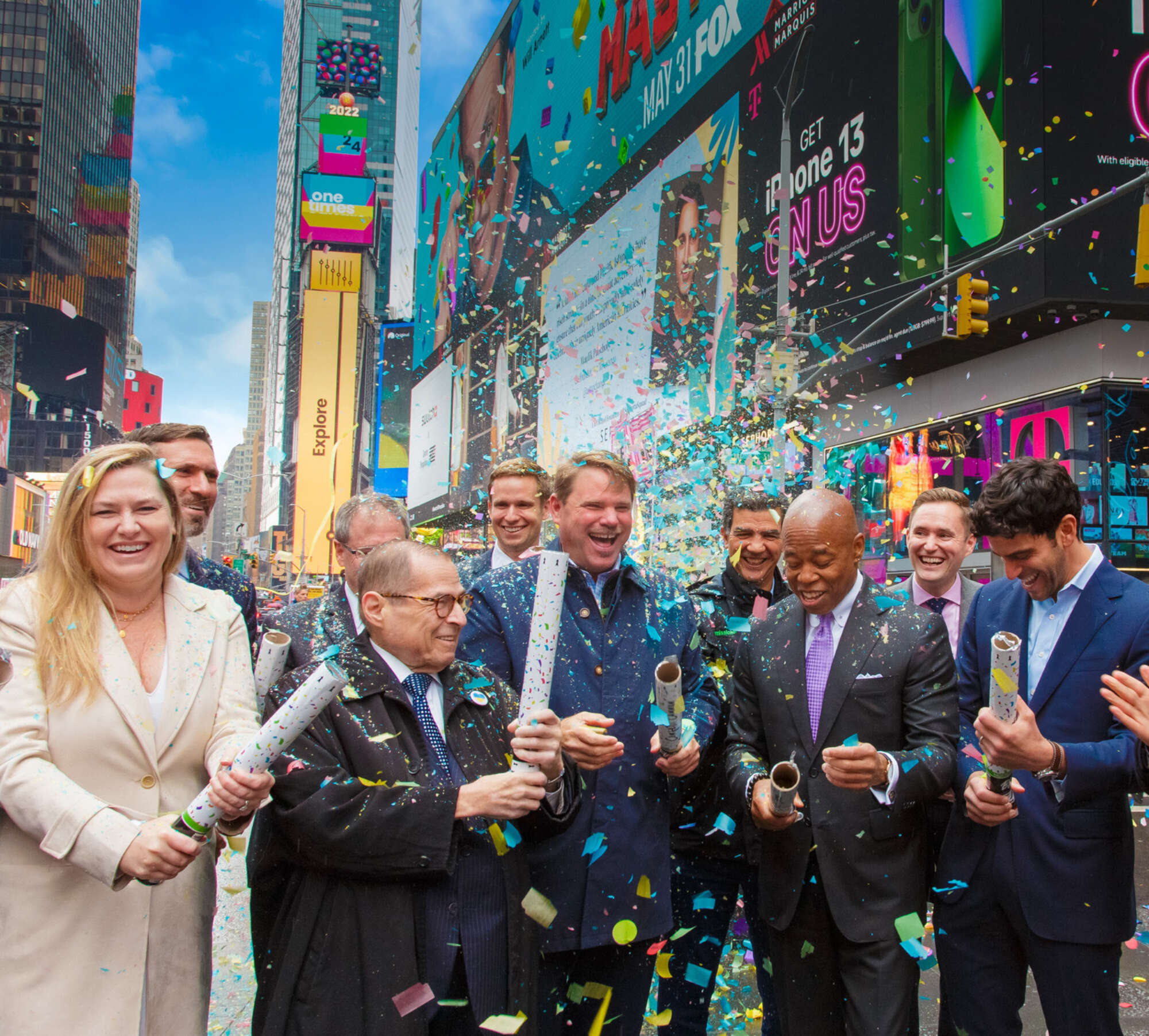 New York, NY – May 6, 2022 – Jamestown, the real estate investment and management firm known for the redevelopment of New York’s Chelsea Market and Atlanta’s Ponce City Market, today announced the $500 million redevelopment of One Times Square—the site of the New Year’s Eve Ball Drop. The redevelopment, which was unveiled today at an event with New York City Mayor Eric Adams, will modernize the historic, 118-year-old building as a 21st century visitor center for New York City.

The redevelopment, which will open much of the building’s interior to the public for the first time in decades, includes the creation of a viewing deck and museum experience. The viewing deck will provide a closer look at the New Year’s Eve Ball and an elevated view of Times Square. The museum will tell the story of the building, New Year’s Eve celebration, and its place in the history of Times Square.

Additionally, the redevelopment will include a next generation brand experience offering brands the added ability to connect with their customers in Times Square through immersive, technology-enabled activations. The interactive experiences will encompass 12 floors and include digital, virtual, and augmented reality integrations.

“Times Square is the magnet that brings so many people to New York City every year, and we need it to live up to its reputation as a global icon to help our economy recover,” said New York City Mayor Eric Adams. “This major project is yet another sign that we are moving in the right direction, towards the more prosperous, innovative, inclusive future New Yorkers deserve.”

“Jamestown, the Times Square Alliance, and New York City work hand in hand every year to put on a remarkable New Year’s Eve event with One Times Square home to the famous Ball Drop at the crossroads of the world,” said Congressman Jerrold Nadler. “Times Square is iconic for so many reasons — which is why I am especially thrilled that Jamestown is investing in Times Square. This $500 million re-development will transform a largely empty and inaccessible property into an alive and welcoming building for all who stop by.”

“Times Square has served as the crossroads of the world for more than a century, and One Times Square is at the center of that global stage,” said Michael Phillips, President of Jamestown. “The building’s next chapter will build on that legacy, creating a new destination in the heart of Times Square for the next generation. With a focus on providing experiences enhanced by technology, the project is representative of the future of real estate and the integration of the physical and virtual worlds. We are reimagining how spaces can be experienced by leveraging the power of AR technology and creative storytelling.”

“One Times Square is an iconic building in our neighborhood’s history: it was the home of The New York Times, and it has been the stage that has housed the New Year's Eve Ball Drop for over a century,” said Tom Harris, President of the Times Square Alliance. “We celebrate with our partners at Jamestown as they start a journey to redevelop this historic building that will inspire and engage the millions of people who visit Times Square from all corners of the globe.”

“We applaud Jamestown’s commitment to Times Square and New York at this important moment and are thrilled to be part of the team helping them to transform this reimagined icon,” said Jay Badame, President of AECOM Tishman, which is the general contractor for the project. “This project will create 500 good paying construction and manufacturing jobs and generate millions in economic activity.”

“We’re honored to be a part of yet another exciting transformation at One Times Square,” said Evan Richheimer, CEO and Partner of New Tradition, the advertising vendor of One Times Square. “Next Generation is going to revolutionize the out of home industry in iconic Times Square and we’re looking forward to working with Jamestown through these groundbreaking developments.”

The redevelopment also includes improvements to the Times Square Shuttle station, which when fully activated, will include a new stair entrance, canopy, and ADA accessible elevator.

Construction will allow the north-facing LED signs to continue broadcasting uninterrupted throughout the approximately 27-month construction period. The redeveloped building interior is projected to open to the public in summer 2024.

“Careful thought was planned around keeping the north facing LED signs lit and the Ball up for the entire redevelopment,” said Michael Phillips. “Advertisers will be able to continue to broadcast their messages to the crowds of Times Square throughout the construction period.”

In December 2021, Jamestown reintroduced VNYE as a complement to the in-person celebrations and as a destination in its own right. Additionally, the firm partnered with Digital Currency Group to bring One Times Square into the Decentraland metaverse, which is the leading decentralized virtual world. These virtual integrations helped increase engagement with New Year’s Eve celebrations in Times Square from 1 billion impressions in 2019 to approximately 2.4 billion impressions in 2022.

With a pedestrian count of more than 130 million in a typical year, and billions of earned impressions from film, TV, and social media, the property is one of the most visible and recognizable locations in the world, offering brands a global stage to engage with their audience. By virtue of its location and wide exposure, advertising space at One Times Square is highly coveted and among the most valuable signage in the world.

Jamestown is a global, design-focused real estate investment and management firm with a 38-year track record and mission to create places that inspire. Since its founding in 1983, Jamestown has executed transactions in excess of $35 billion. As of March 31, 2022, Jamestown has assets under management of $13.2 billion and a portfolio spanning key markets throughout the U.S., Latin America, and Europe. Jamestown employs more than 400 people worldwide with headquarters in Atlanta and Cologne, and offices in Amsterdam, Bogotá, Boston, London, Los Angeles, Madrid, Milan, New York, San Francisco, and Washington, D.C. Current and previous projects include One Times Square and Chelsea Market in New York, Industry City in Brooklyn, Ponce City Market in Atlanta, Ghirardelli Square in San Francisco, the Innovation and Design Building in Boston, and Groot Handelsgebouw in Rotterdam. For more information, visit www.jamestownlp.com.