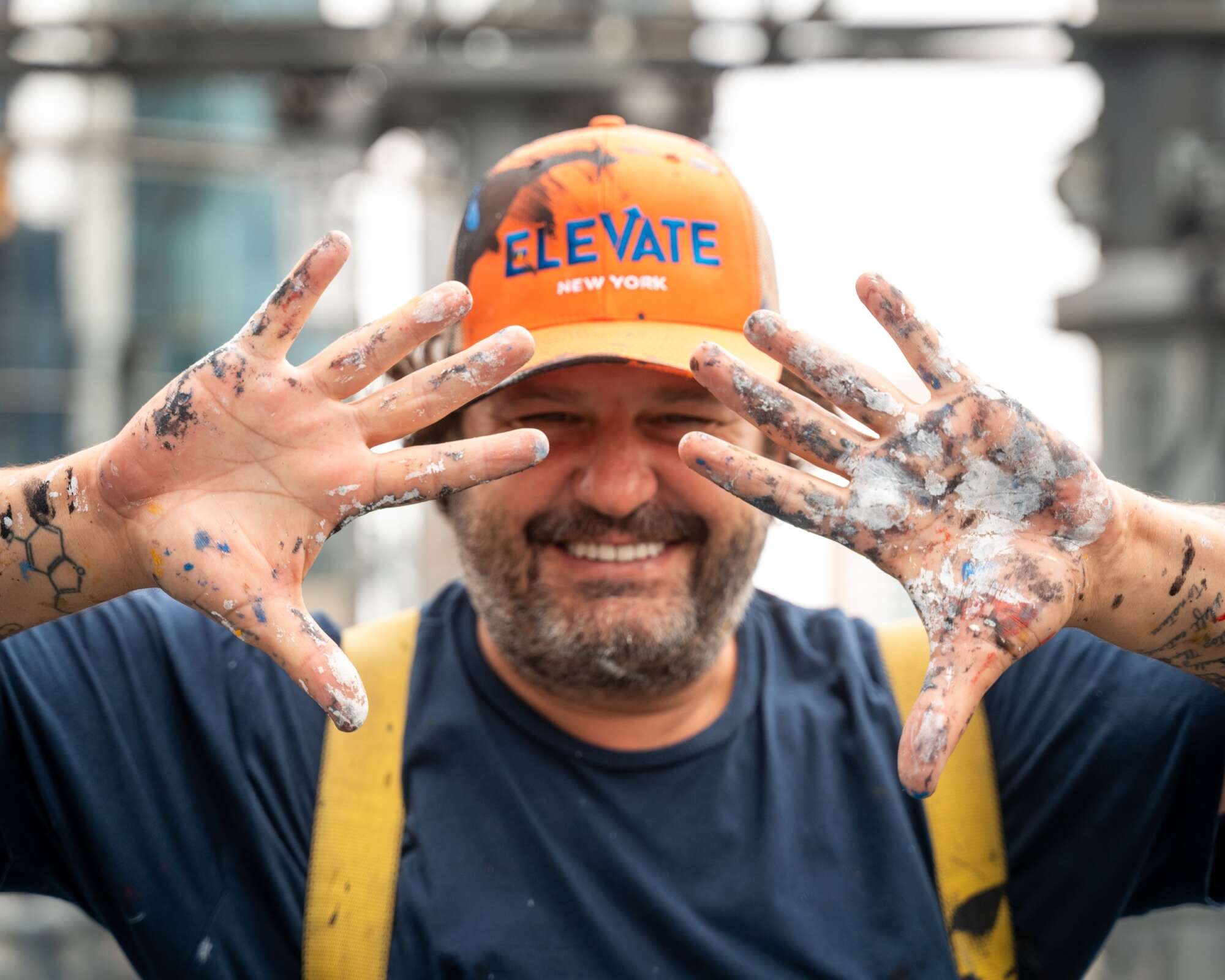 NEW YORK – August 16, 2019 – Times Square will today become the canvas of famed pop artist Domingo Zapata, as he embarks on his most ambitious work to date. Over six days, beginning today, Monday, August 12, through Saturday, August 17, 2019, the Spanish artist will paint a retrospective of his work across a 15-story vinyl canvas at One Times Square.

Encompassing floors three through 18, across the east, west, and south façades of One Times Square, the mural will wrap three walls of billboard signage. At approximately 300-feet in height and covering a total 30,000-square-feet, it will be the largest vinyl mural in New York City.

From 9:00 AM to 6:30 PM each day, Zapata will paint from suspended state-of-the-art scaffolding in front of Times Square’s 350,000 daily visitors. The work, sponsored by Iberostar Hotels and Resorts and Emilio Moro Bodegas, will incorporate themes and highlights from Zapata’s 20-year career, including his Polo, Flowers, Panda, and Flamenco series. He will also refer to the reception held at the Vatican in March 2019, when he was invited to paint alongside Pope Francis.

“My painting at One Times Square will pay tribute to all the themes I’ve worked on for the past 20 years,” said Zapata. “Life is a dream, and I want to communicate that message to all the many people who travel through and cast their eyes on the 'Crossroads of the World.’’

Upon completion, the mural will remain on display at One Times Square for one month. Following the installation, the vinyl canvas will then be deconstructed and repurposed as smaller works and clothing and donated to New York City non-profits, Scholas Occurrentes and Elevate New York.

“We believe there is an incredible opportunity to leverage the visibility of Times Square for more than advertising, and Zapata’s installation is the perfect exemplification of what is possible,” said Michael Phillips, President of Jamestown, owner of One Times Square. “In providing a platform for artists, particularly those as celebrated as Zapata, we can create non-commercial moments and experiences that benefit the public. This installation could have been in any major gallery or museum, but instead, it’s on display in a public space for the community to experience at no cost.”

The installation is the latest in Jamestown’s dynamic public art series at One Times Square, which has included works from French artists Julien Nonnon and Romain Vollet of the famed Le3 Creative Studio and a series from Decode Experiential, a digital art and tech-focused art collective. The public art programming follows the installation of a new, four-screen LED display on the building’s northern façade, which debuted in June. The new 350-foot-tall digital signage provides brands with the opportunity to create compelling advertising campaigns including full takeovers of the iconic site and the ability to “choreograph a show” across several signs for a new type of theater in the heart of Times Square. New Tradition holds the master lease agreement for advertising sales at One Times Square and has assisted in coordinating this art installation with Jamestown and Landmark Signs.

“Domingo Zapata is one of the most genuine and hardworking artists that we have been so lucky to befriend,” said Evan Richheimer, CEO of New Tradition. Richheimer added, “We’re proud to be working with Domingo, Jamestown and all of the sponsors in giving this gift to New York!”

As the centerpiece of Times Square, One Time Square is one of only two stand-alone buildings in the neighborhood offering clear, unobstructed sightlines from all points within the Times Square “bowtie,” an area which encompasses Broadway and Seventh Avenues from 43rd to 47th Streets. With a daily pedestrian count of more than 350,000 and millions of earned impressions from film, TV, and social media, the property is one of the most visible and recognizable locations in the world, offering brands a global stage to engage with their audience.

“Domingo’s art provides a sensory journey that has inspired many for the last two decades,” said Brett Warbrick, Marketing Director for the Americas at Iberostar Hotels & Resorts. “For Iberostar, it’s all about experiences that leave an imprint and allow people to connect with themselves and their surroundings. We’re proud to support the trajectory celebration of this wonderful Majorcan artist.”

Domingo Zapata is a Spanish-American artist born in Palma de Mallorca, Spain. Currently, Zapata maintains studios in his Gramercy Park townhouse in New York City, the Design District in Miami, and Hollywood. For over 20 years Zapata has built a body of work, which varies significantly in motif, though consistently explores themes of sexuality, opulence, and vitality in his signature style. In this distinctive hand, Zapata layers fantasy and reality, luring the viewer into his potent, cosmically beautiful world. Known for his signature "Polo" series, which first gained him critical acclaim, more recent work focuses on themes including his native Spanish culture, American Pop icons, and the state of the contemporary practice.